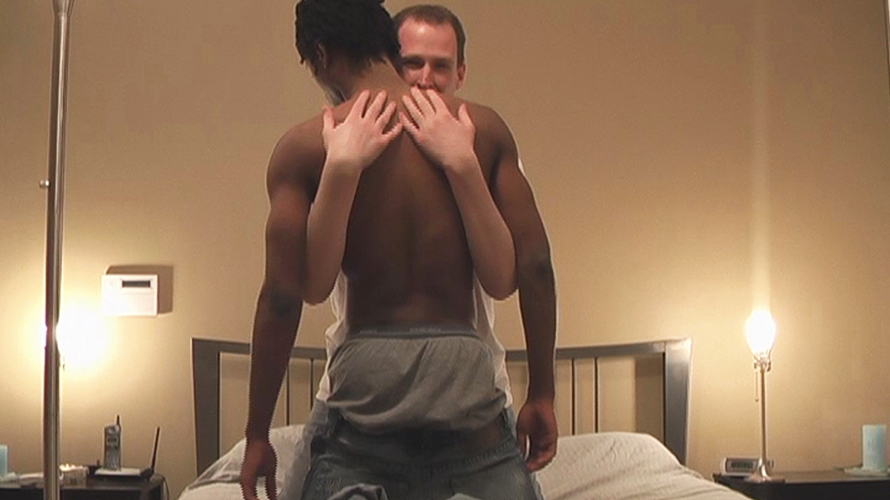 While I take some time to regroup, recruit, and get back into the full swing of production again after a brief hiatus due to the recent website redesign, I’m returning to BBA’s roots this weekend with a digitally remastered and much-requested re-release of an early BBA classic that hasn’t been available to BBA’s viewers for over five years.

Don’t miss the controversial interracial scene that inspired the BBA logo and was one of the first to explore the theme of cocky straight black boys reluctantly compromising their “manhood” for cash.

If you like your thugs slim, young, and cute, looking like they’re barely out of high school, you’re going to LOVE Cortez. I swear this boy’s body doesn’t have an ounce of fat! Cortez looks a little bit like the rapper Mos Def’s cute younger brother. He carries himself with a cocky, “I know I look good” swagger, and after seeing what’s hanging between this boy’s legs, I sure as hell don’t blame him! His heavy, low-dangling balls will also have you drooling in no time, and his tight, high-arching butt is damn near flawless.

Between short-lived jobs with fast-food restaurants and temp agencies, Cortez sells drugs and is always looking for ways to make the most amount of money with the least amount of work. He spent most of last year locked up on weapons-possession charges, and now spends most of his days drinking, getting high, fucking “bitches,” and playing “Spades” with his “homeboys.”

Every time I approached Cortez with the idea of doing anything with a guy, he always turned down my offers with the kind of confidence and certainty that had me ALMOST convinced this was one straight thug who was NOT for sale! I finally grew so desperate to get my hands on Cortez that I offered him nearly TWICE what I paid Jay for his scene in “Every Straight Thug Has A Price” (which was ALREADY an outrageously high amount)! Even then, Cortez initially refused. It wasn’t until several weeks later that I got a call from him late one night, telling me that some pressing financial problems had finally changed his mind.