When it comes to black guys, I’d say my tastes tend to be pretty diverse. In recent years, “thugs” and masculine guys “on the down low” have been my preference, but I still find myself attracted to cute, preppy boys from time to time.

That’s how I ended up meeting DJ, my newest model. I know he won’t be everyone’s type, but this kid is absolutely beautiful to me, and that’s an adjective I don’t throw around lightly. I’m obviously attracted to all of my models to some extent, but there’s something intensely disarming and seductive about DJ’s looks and personality that I haven’t experienced with previous models. All it takes is one look or smile from him to set my heart racing wildly like I’m some stuttering schoolboy with his first crush. That’s the kind of reaction that even the sexiest hardcore thugs rarely inspire. 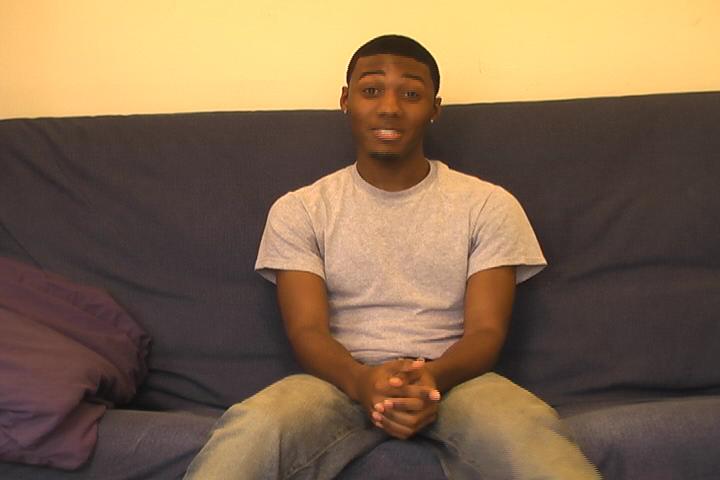 If you share my weakness for black boys with that “barely legal” look, I think you’re going to love DJ! He just graduated high school last month and only turned 18 a month before that. Hey, it’s not called “Black Boy Addictionz” for nothing

I mentioned a few days ago that I was stressing out about finding a second model for a scene I’d scheduled with Eureka for Saturday afternoon. Most of the guys I’ve worked with so far came to me through ads I’ve placed online or by word of mouth. Last Thursday night, however, I was desperate enough to browse local profiles on a dating/hook-up site used primarily by young black males, and basically start propositioning the guys I thought looked cute.

When I stumbled across DJ’s profile, I was instantly infatuated with him and knew that I just had to feature him in one or more of my videos! I sent him a message explaining what I do and what I was looking for, and then desperately hoped he wouldn’t be one of those guys who get all self-righteous and “offended” by the idea.

DJ’s initial response was understandably cold and cynical, but over the course of about a dozen messages exchanged that night, his cynicism gradually evolved into a kind of cautious curiosity, concluding with a reluctant, tentative openness to the idea.

The next day, however, all of that progress seemed to have been erased. When I attempted to resume our correspondence, my heart sank when all I got in reply was something along the lines of, “Nawww, I don’t think I could ever do anything like that.” I responded by saying that I understood his reluctance, and that I’d be willing to pay extra if he ever changed his mind. A little sleazy, I know, but that’s how desperate I was to meet this kid and get him in front of my camera!

When I didn’t get any more messages from him the rest of the day, I pretty much gave up on ever hearing from him again. To my great relief and surprise, however, he started sending me messages again later that night. He must have sent me at least a dozen messages, asking tons of questions about what goes on behind the scenes of my video-shoots. He was definitely the most skeptical and inquisitive model I’ve encountered so far. I didn’t find it annoying, though. In fact, it was just the opposite. His questions were really cute and entertaining, especially when they revealed that a lot of his reluctance was more about his own insecurities about his looks and sexual skills than anything else.