Website Update: The Trap Boy and the Track Star 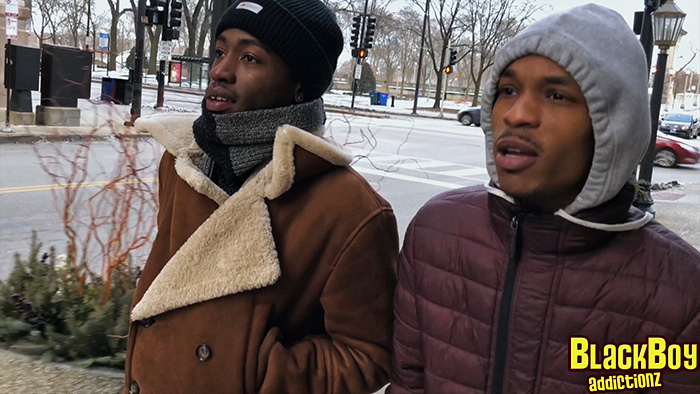 We actually have Mar to thank for sending this irresistibly sexy young star in the making our way. Turns out he and Lil Jake have been “friends with benefits” for awhile, and luckily when we decided to hire Lil Jake, we were also able to talk the sorely missed Mar into coming out of retirement for his friend’s big debut.

See for yourself what happens when the “trap boy” hooks up with the “track star” on a snowy winter day in Chicago for this action-packed encounter that includes plenty of passionate tongue-kissing, toe-sucking, deep-throating, ass-eating, and aggressive RAW fucking…. 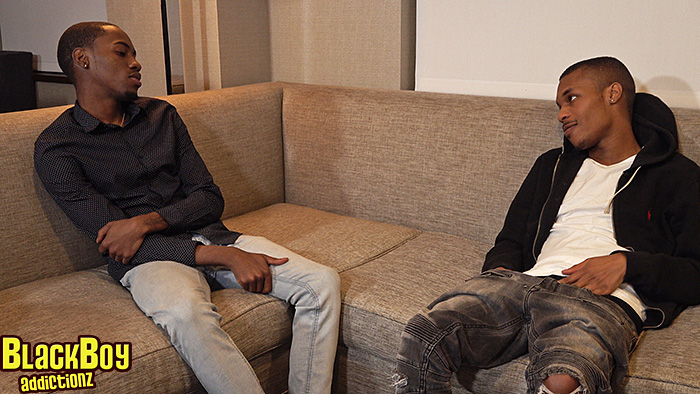 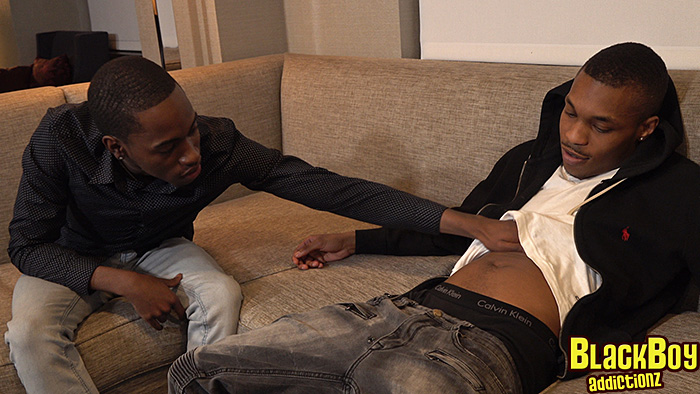 END_OF_DOCUMENT_TOKEN_TO_BE_REPLACED

Dragon Brings Over A Buddy

[Update: You can now enjoy the full-length, uncensored version of this hot scene, along with ALL of my other movies, by joining BlackBoyAddictionz.com!]

Because the whole thing was so last-minute (Dragon was heading home via Greyhound early Wednesday morning), I didn’t have any success putting a scene together, and I finally had to tell an obviously disappointed Dragon that we’d just have to wait and make something happen next time he was back in town.

I’ll be honest, I was pretty skeptical of the idea. I usually like to see photos of a guy and put him through a kind of “orientation” process before filming him….explaining the kinds of videos I make, talking about what he’s comfortable or not comfortable doing in a scene, etc., etc. But Dragon was setting me up on the porn producer equivalent of a “blind date,” asking me to gamble that I’d share his physical attraction to this guy I’d never seen or heard of before. Dragon sounded so eager and hopeful, however, that I just didn’t have the heart to say “no,” so we went ahead and made plans for a video-shoot the next morning.

To make a long story short, Dragon now teases me that I should NEVER doubt him again 😉 !

I breathed a huge sigh of relief when the two boys showed up yesterday morning, and it turned out that Dragon’s friend was a VERY attractive young man with a great personality, gorgeous body, and a natural confidence and talent in front of the camera. 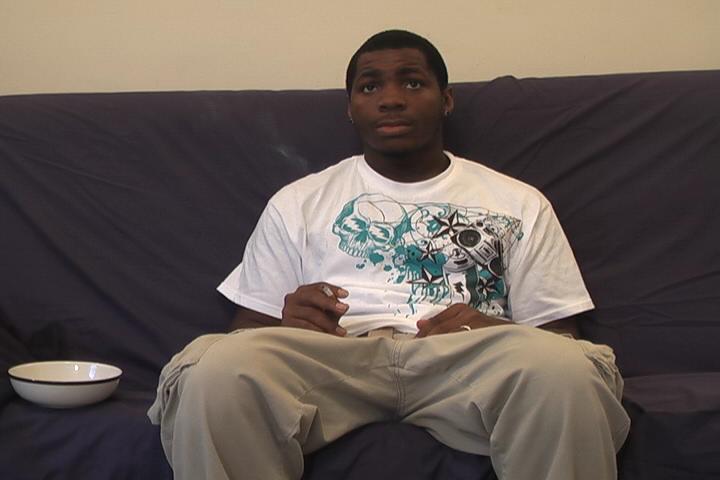 Eureka is a masculine bisexual “top” who just turned 19 and hopes to join the Air Force in the near future. Dragon described him to me on the phone as a mix of “preppy” and “street,” and I’d say that’s pretty accurate. He’s also an athlete….he played football and ran track in high school….and he’s got a nice muscular young body, a bit more “beefy” than most of my models, and five or six tattoos (always a turn-on for me). 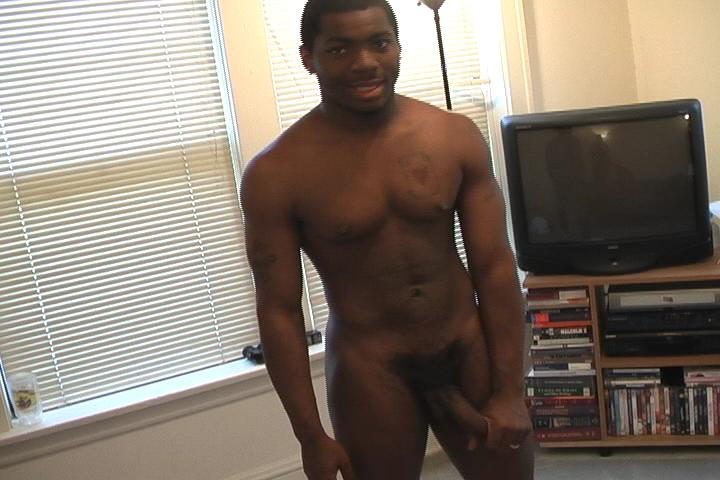 The scene we filmed yesterday is hands-down the most mutual and SENSUAL action scene I’ve filmed so far.

The scene with Dragon and Eureka was very much the OPPOSITE of those themes, but still turned out to be unbelievably hot to watch! The two boys have been close friends for a couple years. They’ve messed around with each other a few times, but never dated or anything like that. They are basically “friends with benefits” who agreed to let me film them having some horny fun together. They had a special, intense chemistry together that was obvious from the start….there were even a few times that I had to tell them to keep their hands off each other until the camera was ready to start filming!

In other words, it’s a far cry from Corrupting Cortez, LOL! Say what you will about my films, you can’t accuse me of a lack of variety!

As an exclusive holiday-weekend treat for my blog readers, here are some hot-off-the-press screenshots from the first part of yesterday morning’s video-shoot with Dragon and Eureka. 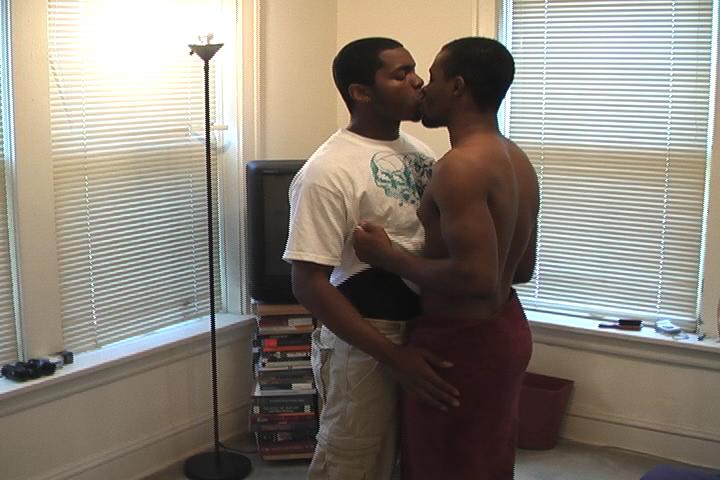 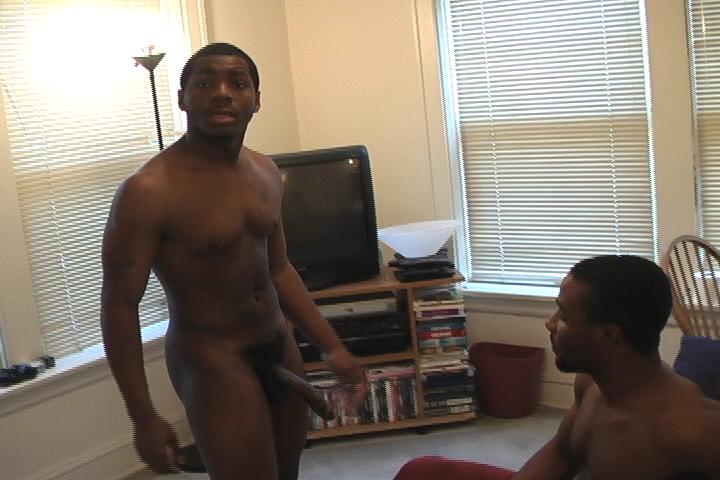 Yes, I nearly dropped my camera when Dragon first pulled down Eureka’s underwear! I defy anyone to check out the photo below and tell me that isn’t one DAMN beautiful dick!